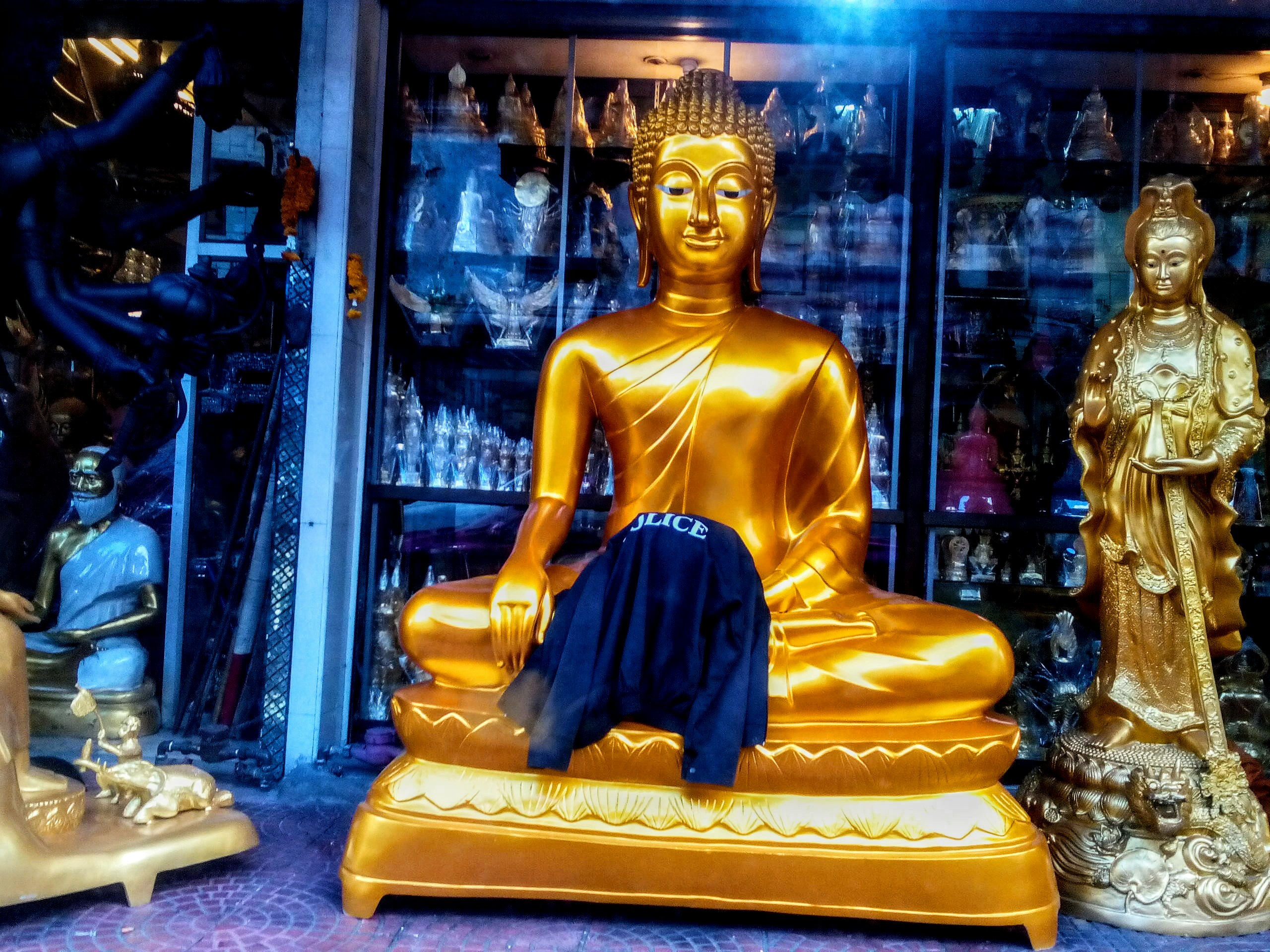 Often dubbed land of smiles, Thailand is supposed to be a paradise for tourists. I was therefore eager to see for myself. I have been to Thailand on two occasions. First time was at Christmas 2016. As a freshman at the University of Southeast Asia Travel, completely inexperienced and unaware, I didn’t know where to go and Thailand seemed as the best choice for a week away from a way too busy life. Plus, that’s where almost everyone I know has been at least once, so I felt it was my turn. I went to Phuket. My general philosophy is that if I like a place, or if a holiday turns out well, I will plan another one in the same country again, but a different location. I can’t say I loved Phuket but I didn’t not like it either. And so in 2017, after some gruesome year at work, I decided to spend my summer holiday in Bangkok and Koh Samui as a form of stress relief. I hadn’t done much research about the destinations beforehand because I like surprise. Or so I thought. I guess I have only myself to blame.

Trip to Bangkok felt like a course. A course of life, a necessary evil, an inevitable travel experience. This post is not so much about where I went and what I saw, but more so about how I did it and, logically, how it shouldn’t be done… unless you enjoy a difficult learning curve.

Bangkok is a bustling capital, in its nature very similar to any other large metropolis. It lures its visitors to all kinds of fun activities within and out of Bangkok, promising an unforgettable holiday. And I was lured too.

So, it happened. As confused as I was on the first morning in Bangkok, I got myself very quickly into the first typical Bangkok scam – cheap tuk-tuk tour. I knew it was dodgy, but it still didn’t deter me. I asked for it, you may think. And you would be right to think so.

I accepted a tuk-tuk ride for a ridiculous 20 baht and the chain of scams was bound to begin. I could perhaps get over the fact that the driver dragged me from shop to shop (tailors, trinkets, shawls, tour agents, bijouterie, you name it) as he added a temple or a monument here and there. But things escalated as our tour was supposed to come to an end.

The story goes like this. First, because you feel guilty and stupid for paying $1 for a whole-day tour, you give a generous trip. Which prompts the tuk-tuk driver to do you the last favour and take you to a boat man promising a unique boat ride through a floating market for a 1000 baht ONLY.

Once you are at the pier, it’s hard to negotiate anything at all, and not so much to my surprise there is a ‘slight’ elevation in price – 1500 baht. You don’t like this, but there is not much you can do. After all you barely know where you are and the tuk-tuk driver is long gone. You fork out the amount and expect magic. Obviously, there is none. The only thing that remotely reminds you of some marketing here is an eager lady in a boat selling trinkets and bloody expensive drinks. Even if you don’t want to buy, you actually want because until you buy nobody intends to move, including the lady and the boat man. So you buy two cans of beer, one for the ‘driver’ too hoping he won’t drown you or something since now you’ve obviously bonded. And that’s it. All the market and all the shopping done.

Easy peasy. Basically, I paid for a gentle, rather short, I should say, float along the river.

As if the tuk-tuk ride wasn’t enough, I got myself into even a worse type of scam the next morning. And quite impressively, floating market was involved again. I know, I know what you are thinking… A taxi driver outside my hotel offered to take me to the most famous and the most beautiful floating market not only in the city but in the whole Thailand. Can you imagine?! He promised a unique experience for a mere 1000 baht and less than an hour drive! This time I wanted to go smarter about it and refused. But my original plan for the day didn’t work out. What can I say? It was a bad plan, so I figured I wanted to see the floating market after all since it’s so cheap. Coming back to the hotel, the driver who originally offered the trip was gone. I figured they all sell the same trips so I asked another one. Insisting on his using the meter, request I thought would make me scam-proof, we set off. Some 80 minutes, 150 kilometres and 1400 baht later and I grew increasingly impatient and scared AF. ‘Where is the driver taking me? Kidnapping me? Raping me? Human trafficking me?’, were questions that ran frantically through my head. No phone on me, no knowledge of the whereabouts, nothing. ‘I’m screwed,’ I thought.

Luckily, it was ‘just’ a scam. An argument I attempted with the driver didn’t go that well either. To cut a long story short – a trip which was supposed to cost 1000 baht (return) and take about 50 minutes (one way), cost 2000 baht and took 2 hours. If I add another 1500 baht I had to fork out for visiting the actual floating market, it was a disastrous trip. Not only budget, but also safety wise.

To crown it all, in the evening while winding down after yet another successful day of scam at a bar, I was forced to try a roasted scorpion and offered money for sex. Lucky me! And, no, of course I didn’t accept the offer…

The highlight of the trip though was definitely Sky Bar at Lebua hotel. There are actually two bars from which you can observe the skyline. The view from there is magnificent and observing Bangkok with its ‘impressive’ traffic trails was just amazing. Prepare to pay hefty amounts for your drinks or dinner but the view is definitely worth it.

My next stop. ‘Finally, I will be able to relax’, I thought. Wrong! Once I set my foot on the island I got badly sick. Every could has a silver lining though, and out of boredom, closed in my room, I started a bit of research about the island, Thai people and their culture in general. The more I read, the less convinced I became about Thailand being the land of smiles. Articles followed one another. I read a lot of stories about scams (including tuk-tuks and taxis of course – isn’t that an awesome timing?), robberies, deadly accidents, drug and alcohol related crimes, rapes, murders and other atrocities. The Internet also seemed to be flooded with an array of shocking stories about backpackers and foreigners being murdered or disappearing under peculiar circumstances. The conclusion one could make was that Koh Samui, along with its neighbouring islands, was a mafia-ridden epicentre of crime.

I didn’t know what to think really, but figured such things for sure happen everywhere around the world and if you had your wits about you nothing could happen to you. So on a sunny afternoon, when I already felt better, I ventured to the beach to enjoy the sea and explore the bright side of the island for a change. Chilling on a sunbed I felt like in a paradise for a moment. But it was a very brief moment. At some point, I saw people gather towards a spot a few meters away from me. Quickly police officers wearing masks were present too. Within minutes all the beach-goers flocked towards that point. Apparently, a tourist, led by a pungent smell, discovered a dead body buried under the sand. A few hours later headline “Horror in paradise” appeared online. I must confess that even after reading all those stories I didn’t think I would get to witness foul play on one of the most beautiful beaches on Koh Samui. If I add to it that I was offered a happy hour price on marijuana whenever I appeared on the beach, one of more serious scams that could have disastrous endings, I must say it all made me feel uneasy, indeed.

What’s the take away?

My advice? Don’t wing it! Coming prepared saves you a lot of hassle in any country. And quite frankly, there is nothing worse than knowing you could have prevented being totally scammed with a couple clicks online. This goes especially for solo female travelers, as want it or not we are often perceived as easy targets.

I must also add that my experience should in no way deter you from travelling to Thailand. Just because I was stupid and unaware does not mean the same must happen to you. On the contrary. Just do your homework. Thailand is full of wonderful places and amazingly friendly people. You just need to know where to find them. I myself have decided to give us, Thailand and I, one more chance and I will be travelling to Chiang Mai in November this year.

Full stories about my Bangkok scams are coming up soon.