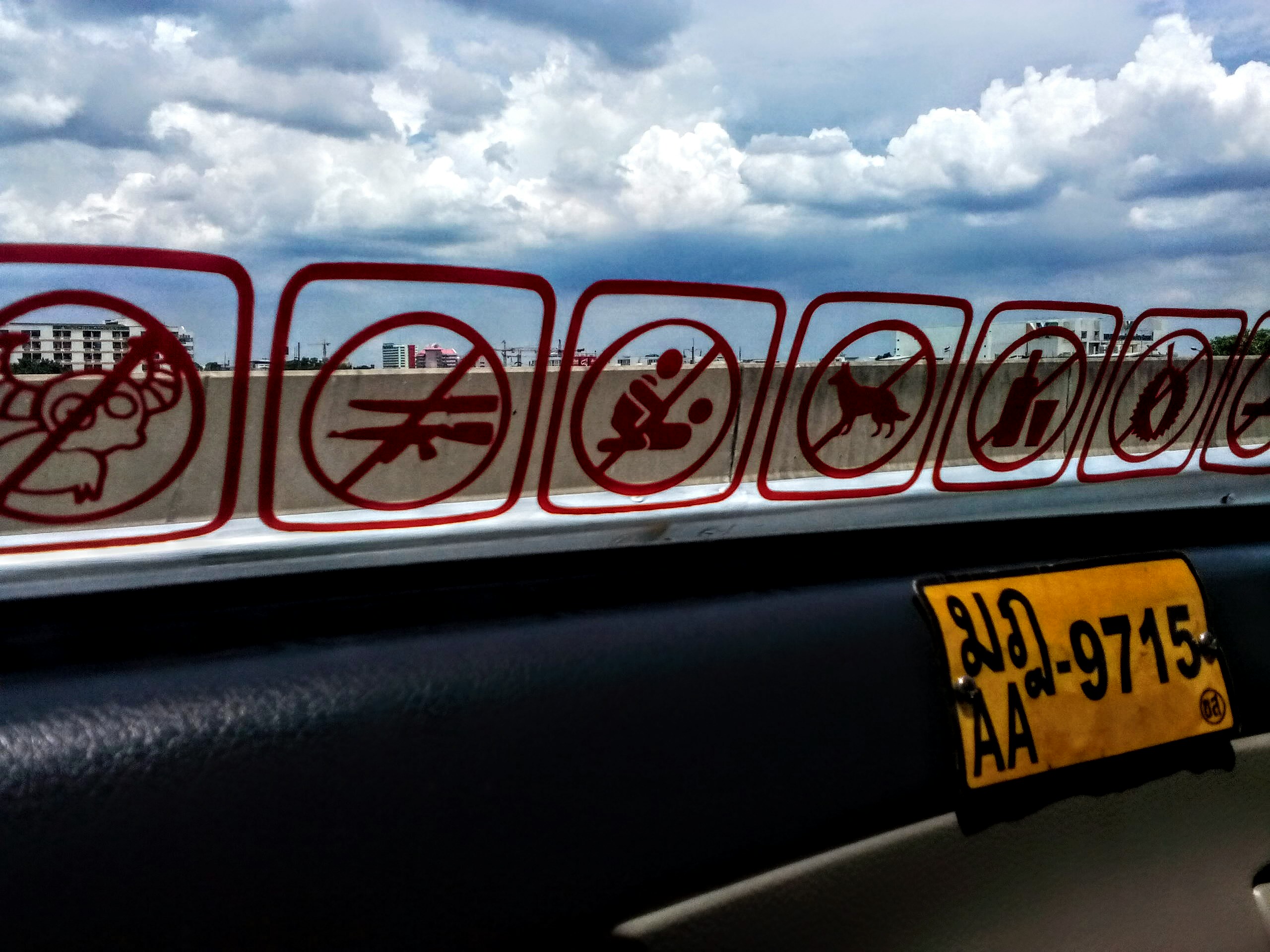 The next day I decide to do the same routine. Go to the same crossroads, ask the same man and take another 20-baht ride. This time though, since I have learnt my lesson, I will be smart about it and negotiate. I will have the guy take me to places I want to, and maybe some shopping places if necessary, just for the sake of it. Naïve me! Yes, in hindsight I must admit there was nothing smart about this. The Bangkok scam haze clouded my mind totally. On my way to the crossroads an eager taxi driver stops me right in front of the hotel and tries to talk me into a trip. “Young lady, best floating market in Asia. One hour ride only,” pointing his index finger energetically at his laminated poster. “One hour only and 1000 baht for you only,” he continues. “If you want a discount, also possible for you, young lady,” he adds. He repeats the same sentences over and over and since I am impatient to carry out my ingenious tuk-tuk plan, I say ‘thank you’ politely and promise I will come back later, which I obviously don’t mean.

When I reach the tuk-tuk crossroads, my guy is not there. Instead, I see a couple taxi drivers enjoying their smoke break in the shade. I approach them boldly and explain who I am looking for confidently. One of them looks at me slightly quizzically and then explains that such rides are not good and they take customers to shops and travel agents to lure more money from them (yeah, tell me about it!). He further advises that the best way to travel Bangkok is by using a regular yellow-green metered taxi. He claims it’s simpler, cheaper and also safer. On the one hand I am pleased and quite surprised actually with the level of honesty I encounter here, on the other hand I am disappointed for not being able to carry on with my smart plan. But then it occurs to me! ‘Well,’ I think to myself enthusiastically, ‘why not take the taxi to the best Asian floating market then?’ And so I make a beeline back for my hotel where I spoke to that eager taxi driver earlier.

By the time I get there he is gone but there are other taxi drivers, so I proactively ask them about him. They wonder what I want and, once I explain the situation about the trip I was offered, price and all that, they all offer to take me there. Armed with the newly acquired knowledge about exploring Bangkok and using taxis, I feel now fully-equipped to take any kind of trip in this bustling capital. So I nod in agreement. Some talks go down between the drivers when one finally says, “Okay, young lady, let’s go!” I just make it very clear, however, that I want him to use a meter and am not going anywhere, unless he agrees on that. He looks at me as if he is puzzled and with a touch of irony too, but then nods readily and opens the door to his car for me as a sign of agreement.

When I sit though, for the life of me I can’t see a meter in his car. At some point I ask him again whether the conditions we have agreed upon are clear. He skilfully removes something like a cover from his meter which leaves me slightly sceptical, but I shake it off quickly.

Once we set off, the driver tries to engage in a simple conversation, which feels somewhat reassuring. However, I remind myself that I always have to keep an eye on the meter because after doing the math about the whole trip I logically assume that one way must be worth 500 baht and 1000 baht is the total price. Also, why would the other driver offer a discount otherwise? Only that I when I think about it as the road takes us further from the centre, I realise I haven’t really confirmed the price with the actual driver. And because this is Thailand, and a Thai taxi driver and a Thai way of business, I am just about to see how wrong my math is.

After about 30 minutes during which the driver stops by a gas station to have a cigarette and coffee break, with the meter on obviously (yes, you want to kill him but you are the one who is unarmed), I start feeling slightly nervous. The price on the meter goes up and when it’s already beyond 600 baht I ask the driver how far away from the market we are. He says it’s just another 10 minutes. This calms me down as I figure we will still be within the originally promised time frame and price range. After 10 minutes, however, we are still on the road and no floating market in sight. Not to mention the greedy meter going up. So, I ask the driver again, at this point already fuming a bit inside, how long it will take. He smiles, nods and says 20 more minutes. Now he literally has my blood boil. At this point I start arguing with him. Not in my western manner, I try to keep it Buddha-like, but still one can see how upset I am.

I tell him about the deal I was originally offered again and complain about the ride being too long and expensive. Now I also understand why he looked at me so quizzically when I was so adamant about the meter at the start of the trip. Surely he must have felt a great deal of satisfaction when he thought ‘Wow, what a stupid idea to take such a long trip with the meter on.’ But of course he wouldn’t tell me that. Business is tough these days.

Now I start thinking that he might be even prolonging it intentionally to make more money, taking me around aimlessly. After all, I wouldn’t know, would I? This thought makes me furious but I understand there is not much I can do. The only thing I am trying to do is bargain like crazy and make him take me to the floating market quickly. After a heated debate about the price, length, the other taxi driver and whatnot, he crowns it all by plainly suggesting that we should go back since I don’t seem to be enjoying the trip at all. This makes me see red and I lose my cool. I refuse adamantly and argue about the price even more. I complain about the Thai way of doing things and accuse them of cheating tourists. But there are thoughts at the back of my mind which prevent me from going further. ‘What if he rapes me here? What if he wants to human traffic me? What if he kills me and ditches my body in a field? Nobody will know,’ are all the thoughts going through my head. Paranoia at its best. I am sweating with anger and fear at the same time and feel dizzy, sick and mad at myself for my sheer naivety. I just see all that possible scenarios unfold in my head, wild images running one after another, and I go totally crazy.

The driver notices my distress and tries to calm me down by blaming the other driver. “It was not fair what he did, young lady,” he goes. “This trip much longer, not 1 hour,’ he sophisticatedly adds. “I never treat tourists like that, I no scammer,” he makes a strong point. I know it’s just a bunch of bollocks but at least it gives me some reassurance that all the above dark scenarios may not be happening after all. That’s already good enough. For the rest of the ride I sit silently, with no intention to communicate at all and just wait for him to take me to that bloody market. We reach in about 2 hours and to my surprise the driver agrees to a deal I suggest. He says 2000 baht is fine for the whole trip. I suddenly like him more but still feel this is the most messed up trip I could have possibly taken. When I learn that in order to actually get to the market itself I need to fork out another 1500 baht for a boat I just shake my head in disbelief. ‘Is this for real?’ I ask myself repeatedly. ‘Does it say Open to scamming on my forehead?, I ask myself not really knowing what to feel. The thing is that when I talk to other customers there, they all seem to have some great arrangements and deals so I really feel like a child first day at school. It feels as if the driver has let the boat people know that I am a complete newbie and they can rip me off. Well… I have only myself to blame. At least the boatman here is cool and I take some nice pictures.

I must admit the floating market is definitely the highlight of the trip, unless the taxi driver has some aces up his sleeve for the return trip. Quite (un)surprisingly, the journey back takes about an hour or so, so I figure the driver has indeed been playing me up, prolonging the drive, but at that point I couldn’t care less and just see myself sipping a cold beer upon my return at some bar in the famous Khao San road. In an attempt to repair the broken reputation of taxi drivers and maybe to bring a smile to my face, the driver suggests taking me to another market in Bangkok centre just totally ‘free of charge.’ I snort loudly and give him a weird look. As smart as he is, he understands that I am done with markets in Bangkok…

Ironically enough the driver who originally offered the whole trip to me takes me to the airport the next day. Hovering in front of my hotel, I can’t avoid him. Of course I am still upset about all that happened and all the scams I fell into but since I am leaving I try to set my mind on the next trip. The driver offers the fare of 500 baht. I don’t respond and just sit silently in the car but he insists on my confirming. I say 400 baht adamantly. Turning his head to me he says, “Only for you young lady.” On the way to the airport he tries to have a conversation, but I completely ignore him. He doesn’t like that at all but I am afraid I don’t have any energy left. When he drops me, I give him a 500 baht note, expecting 100 baht change. He says he doesn’t have change and spreads his arms wide in confusion. I stand there, staring at him, telling him angrily to find the bloody 100 baht as I am not moving without it. He runs around asking different drivers and at the end comes back with 30 baht in his hand. To make me even more furious, he pulls out a dollar out of his wallet. “Hope you had a nice stay here, young lady,” he adds with fake politeness. At this point I allow myself to be extremely rude and all the stress comes out in one harsh sentence. “Most Bangkok drivers, and YOU especially,” pointing my finger at his chest dramatically, looking him fiercely in the eye, “are f*****g scammers and that’s what I will remember from this trip.” I enunciate the two main words very clearly just to ensure I give vent to my frustration properly. It makes the driver feel super angry which in return makes me feel darn good.