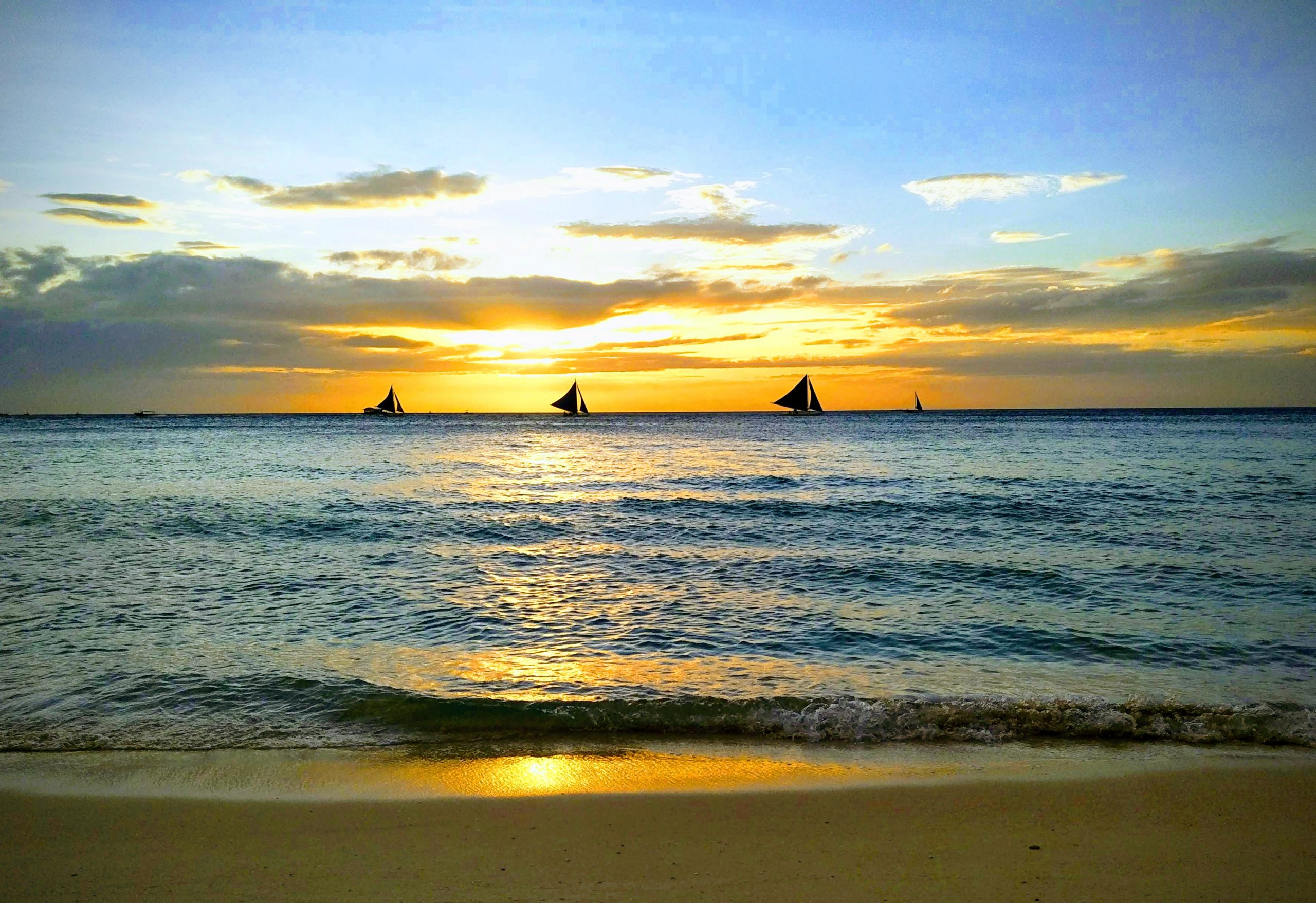 Let me just say that planning the trip to Philippines was a real nightmare. OK maybe that’s a bit exaggerated but it certainly wasn’t easy. The thing is that I like to have a plan when I travel. For someone like me whose leave is always allocated in advance it’s absolutely unthinkable to go somewhere and wing it. Therefore, I always buy return flight tickets in advance also within the country I intend to travel to if other means of transport are not available or convenient.

With Philippines though this was a really bad approach. I planned my 2018 December holiday in Philippines meticulously in terms of places to visit and dates already in June and then proceeded to booking flights and accommodation. With Air Asia from and to KL and Cebu Pacific for flights in Philippines. The latter has a reputation for being the most terrible airline out of all the terrible (although apparently the Indonesian Garuda might be even worse which I have yet to see for myself). Nevertheless, the point here is it didn’t somehow occur to me to check the reviews before the booking (excited me!).

On the other hand, the silver lining is pretty obvious here. If I had checked them before I’d have felt even sillier for still booking with them. The chain of changes in my multiple flight bookings was indeed nothing short of amazing. First, Air Asia cancelled my return flight to KL altogether. Rebooking involved a long wait on the online chat but it worked. Relieved after the successful rebooking with Air Asia, I was totally not prepared for what Cebu Pacific had up their sleeve. These guys shuffled my bookings multiple times. And when I say multiple, I mean totally bloody multiple.

When they sent me an email in August 2018 changing one of the flights (changing not only the time of arrival from early morning to past midnight, but also the arrival airport way further away from my final destination) I spent days figuring out how to get around this. However, when more emails followed later with other changes I kind of figured that’s the modus operandi and luckily remembered that there was still the Philippines Airlines which pretty much saved me a lot of hassle. I did lose some money in the process of finding alternatives, but it was not a biggie after all. That’s life. To be fair, Cebu did refund one of my flights I cancelled due to their changes and allowed me to use one leg only of a two city flight. The take away? Don’t book your flights too in advance and think twice about the airline of your choice.

If you want to fly to and from Boracay, check either Philippine Airlines or Air Swift for seamless connections.These airlines fly directly from Cebu and other cities and are more than affordable. There are some bad reviews about them too and but for me it worked like a charm! Remember that booking way too in advance is not advisable. Just wait until a few of months before the actual trip.

It was a funny coincidence that just a few days before I was supposed to leave I had a Filipino guy in class. Since it was quite surprisingly also a one-to-one class, we talked in a more casual way. When he learned I was going to his home land he just said: “Oh, really? Philippines are such a weird country.” And while I didn’t want to create any preconceptions before actually landing there, in hindsight I must admit that the dude was right.

Boracay and its White Beach are magic. I was there shortly after the reopening in October 2018. Everything seemed clean, organised and controlled. Not bad, really. If you are a complete sea addict and happen to stay just a few steps from the beach what’s not to love? I stayed in Calypso and it was a great choice. Awesome breakfast, right on the beach, Station 2 so reasonably quiet. No complaints whatsoever. There were no sunbeds or chairs on the beach though anymore so that’s a little bummer. That’s because señor Duterte wants to keep the island super clean. So hats off to him!

In truth though, leaving the lovely weather aside – it rained every single day and sometimes all day too – it’s just a bit too ‘vibeless’ for me. Most people are after business and it’s hard to see a genuine smile. When I think about it I am probably the only one who smiled there. And most of the times I got nothing in return, not even a slight movement with corners.

I spent my time there basically watching the rain, waiting for the rain stop, hiding before rain and so on. Therefore, if you want sun and a tan, don’t come in December. For me it was still awesome though. Nothing beats a dip in the cold sea during rain. Real conditioning. And I was not the only one who tested their stamina there.

There are plenty of activities you can do though. Just because I avoided them altogether doesn’t mean that you have too. There is island hoping, diving, snorkeling, sunset cruises, tricycle island tours or just visiting the beaches nearby. Plenty to occupy yourself with for a few days for sure. And all of this can be easily bought on the beach. That is, when a beach boy approaches you smiling, he most likely wants to sell something to you, unlike for example in Bali, when they might try to sell themselves to you. Which is a bit different, isn’t it? Well, anyway, where was I …?

White Beach is indeed beautiful and amazing and awesome and all that jazz but even outside the peak season it’s crowded and it always will. If you don’t like crowds, stay in Station 3.

Nevethless, venturing out of White Beach, that is the main road areas, means confronting another reality altogether. It’s all pretty grim actually. First of all, it’s all one big construction site, new hotels, restaurants were being built and the road was a complete mess. Constant December rain also created a lot of large and deep puddles making it hard to commute. To me it looked as if they were building an island from scratch. This contrast makes you feel that White Beach is just a tiny stretch of fake reality made for us tourists who would otherwise shun this part of the world. Maybe today it might look a bit better, but I wouldn’t expect miracles.

For seamless getting to Boracay I’d recommend My Boracay Guide. They pick you up upon arrival to Caticlan airport (or Kalibo which I wouldn’t recommend as it’s further away). After that you are just a car, boat and tuk-tuk ride away from the front desk of your hotel. Now sometimes you will get offered assistance with luggage from random guys monkeying around. Don’t fall for it. They don’t want to genuinely help you for your sweet eyes, they want your money.

Flying to El Nido with Air Swift was easy and fun but compared to Boracay, El Nido’s beach is …ehm how do I put this? Ugly and dirty seem to fit best. However, you are not here for the beach but the absolutely dazzling, jaw-dropping sceneries that come with their signature boat tours.

When it comes to tours, choose your tour company well. It can seem like a daunting task but reviews online are mostly accurate. I used Discoverelnido. They were good for the first two tours but screwed up pretty badly with the third one. Lesson learnt – the choice of tours on offer looks impressive, but it’s really not. I assume that advertising just A and B tours would look terrible so they advertise ‘the whole alphabet’ instead.

In reality A and B are the most exposed and preferred tours and if you want any other tours make sure you ask the hard questions such as: ‘Am I going with the same company?’, ‘Will it be the same crew?’, ‘Are you possibly going to merge us with clients from other companies and have us wait hours stranded on the beach?’, etc. You get my point here, don’t you? Tour C was a joke and not worth the money. Can’t imagine what D could be possibly like. On the plus side, A and B are indeed awesome and the lunch was really great too, on all of them actually. So if nothing else, at least I ate well on the C. For around 30 dollars you get a good glimpse of this area’s spectacular sceneries. Lagoons, secret beaches, deep water snorkeling and many more.

If you are like me and enjoy photography, by all means come prepared and have a go-pro with you. I didn’t and that’s why this post is sort of visually limited. I am simple when it comes to gear and like travelling light. At the time of my Philippines adventure I only used my mobile phone. Obviously, that’s totally useless for El Nido as most tours involve hopping on and off the boat and actually swimming to the unique sceneries that this place has to offer. Even with a waterproof case, which I had, it will not work out. So if you want to bring lovely memories in the form of stunning photos, take a waterproof gear, for God’s sake, else you will end up like me.

Peacock was my go to restaurant throughout the stay. The service is excellent, food scrumptious and the ambiance really great. No wonders. It’s owned by a European so he keeps the standards pretty high unlike other local businesses, which I tried too but will avoid mentioning them.

As far as accommodation is concerned, El Nido is infamous for expensive low class hotels and a lack of reasonable quality for a reasonable price. Luckily there was Swiftlets Inn which is definitely a safe bet. They will also help you with transport or anything else you may need.

Have I already mentioned that I am a beach maniac? And for beach maniacs like me, or you, this was just wow! This was definitely the highlight of my El Nido trip and I often return to this day in my memories. Aside from the fact that the whole stretch of pristine sand and refreshing sea water is practically left to yourself, I love this place for its clear politics against mass tourism development.

Huge ‘This land is not for sale’ banners dot the long strip along with rudimentary chalets where guards live 24/7. A few of those guards waved at me when I passed by and approached me nicely on the way back. At first I was a bit scared but there was no reason for this. Indeed, it was this encounter as well as my trip to one of the most beautiful beaches in the region that made my trip to El Nido memorable. They have my utmost respect for this because some countries obviously lack this pride and love for their own natural treasures. While wrongly manifested national pride is unpleasant, here I give thumbs up.

In order to get there, you need to either rent a motorbike, which I know nothing of, or take a shuttle for around 10 dollars with one of the El Nido tours companies.

Alright folks, thanks if you read until here. I know this one was a bit long. But after all, it was three weeks. Part 2 coming soon. Stay tuned:-)