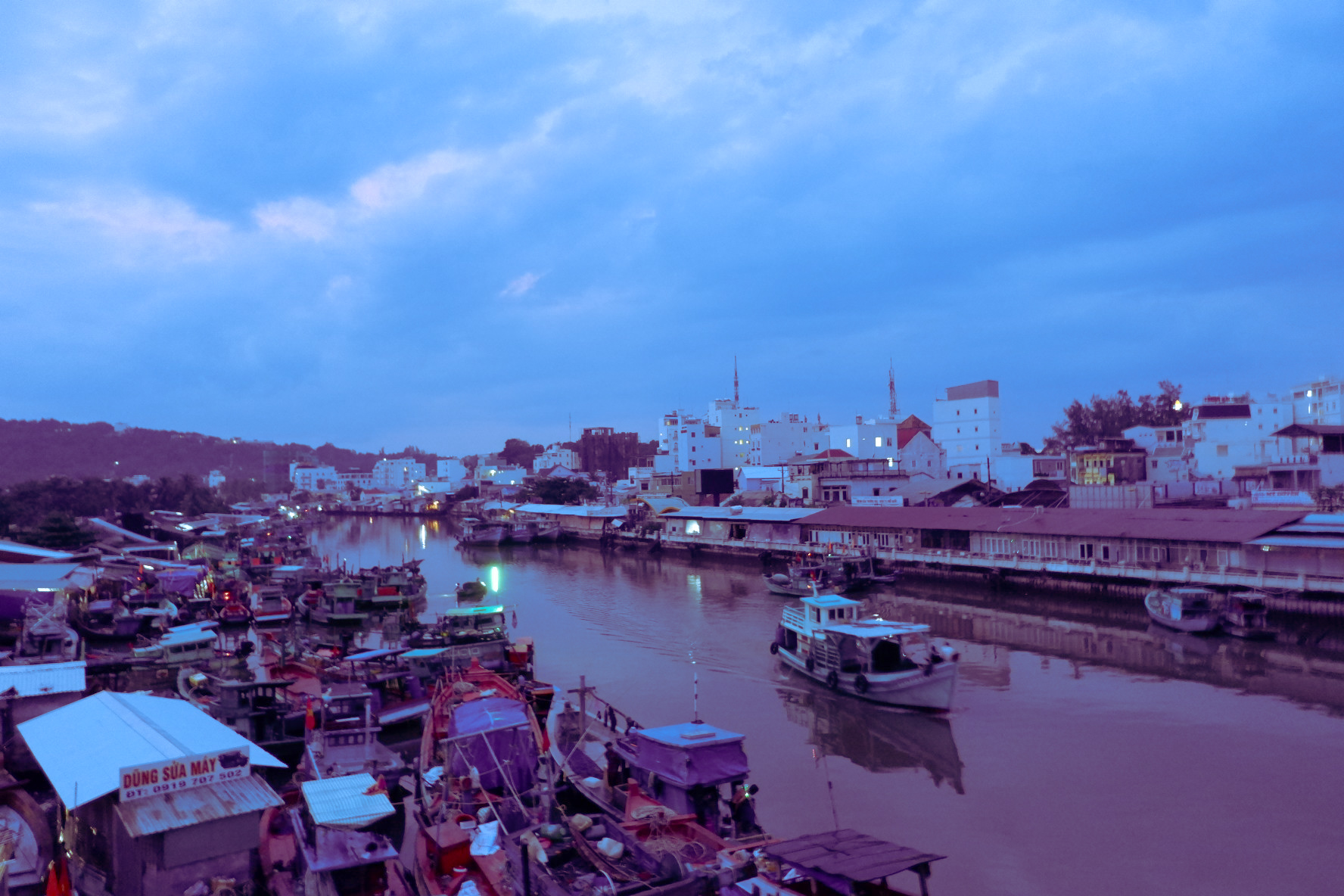 “Fringed with white-sand beaches”, “a must-visit beach escape for Western expats and sun-seeking tourists”, “idyllic beaches, romantic sunsets, evergreen forests, and a serene atmosphere, making it an ideal holiday destination” – that’s how the internet swears by Phu Quoc (further referred to as PQ). As you can see, superlatives follow one another. Well, my first piece of advice here will be a very firm – don’t fall for it! I have to join a handful of like-minded individuals, who claim in reviews what I am going to describe here in more detail. That is, that all the above boasts are blatant lies. I have to burst this bubble and tell you what PQ really is about. Don’t take me wrong, it’s a nice place with its charm. In fact, there are many lovely aspects to this island. However, pristine beaches and paradise-like atmosphere are not it.

Some people also seem to claim, beyond unrealistic fairy tales of this island’s magic beauty, that getting from the airport to main beach aka the area around the capital – Duong Dong – takes about 30 minutes. Well, I took a bus and was in the buzz of everything in a nice 7 minutes. What’s more, it was a super cheap private ride. There were no other passengers, except for another local lady with a baby. Hats off to the driver! Or maybe sometimes charm and broken English can go a long way. Broken English is certainly something you should try in Vietnam as fluent English will get you literally nowhere.

Take for example the busiest and most famous beach on the island – Long Beach. Without further ado let me just say it’s dirty. The sand, water and surroundings are all dirty and it has this weird sticky feel. I understand I might be spoilt but I seriously admired everyone who swam. Unsurprisingly it were mainly locals who seemed to enjoy the murky waters with pieces of rubbish floating around the most.

Trust me, most beaches along that shore are not any better. Even if you held your nose and closed both of your eyes, you would still have to inevitably come to an understanding that testing such waters might be a hazard. What’s more, most photos online are heavily photo-shopped so forget those pictures to tally with reality and save yourself some disappointment.

Overall PQ is full of building sites, dumping sites, unfinished or abandoned sites and in general simply few pleasant sites. If you travel around the island, you will deal with bad roads which rain regularly transforms into a mud fight as there is no way you can come clean out of this. Literally. Infrastructure along the main road is non-existent, except for a couple of rudimentary tea shops. While I mostly like rudimentary a lot, here it felt weird.

During my wandering around, I didn’t come across a single place or corner where I’d say to myself ‘Oh, that’s quaint’. I know we all perceive beauty differently but to me PQ is an island with no beach vibe whatsoever and if you are like me, think twice before booking a holiday here. There are better locations within Vietnam itself, such as Hoi An and An Bang. But frankly, if you want beach, I’d say give PQ (or Vietnam for that matter) a wide berth. There is a reason why they say Vietnam is not a beach location and I would sign this statement without the slightest hesitation. And if PQ wasn’t an island, I would even dare lie and say it’s landlocked to save you from the misery of a vitamin sea junkie falling for this trap.

Exploring the island, you will ride past ugly, monumental, tasteless and scary looking projects. Huge construction sites, most propelled by Chinese investors, dot the main road. These ridiculous à la Disneyland buildings can’t nothing but remind you of bad, totalitarian regime the intentions of which are to wipe out any signs of local culture and architecture and replace them with hideous, wannabe modern concepts that could possibly only attract a blind person or a person with no taste whatsoever.

What pains me more is the fact Vietnam is not the only country which partly succumbed to the infamous Chinese greed and bribery. Yes, it’s true – money talks loud, indeed. And that’s why all these projects you will see talk even louder. Their ugliness is hard to describe for a person who would love to chill on a beach, enjoying watching sunset with a bottle of beer in hand.

Unfortunately, I don’t have so many photos. Partly, because I was so exhausted by the time I reached this apocalyptic spot, and partly also because the guards were constantly after me. They even chased me on the bicycle shouting “No photos allowed.” Doesn’t this remind you of something? Oh yeah, Chinese style. Writing these lines amidst the corona virus outbreak and lock-down, trust me, I have a very bitter feeling in my stomach, wishing some storm wiped out all that shit (I mean the ugly buildings obviously) and allowed this part of the island to go back to it’s natural feel. Well, maybe the corona virus outbreak will now stop this bloody development, which would be a silver lining, definitely.

If I said that the hunt for the allegedly only pristine beach was strenuous, it would be an understatement. I rented a bicycle and it was one of the worst things I could have done. There were moments I seriously thought I’d collapse on the road at best or have a heart attack at worst. I kid you not. It was such a messed-up trip that has left me with strong impressions to this day and therefore I will devote another post to this, presenting you this part of the short stay in PQ as a story. Stay tuned:)

This trip was so unthinkable that it left me with no energy whatsoever to explore other places. To be fair, I had also very little time, but one thing is for sure. I did 70 kilometres around the island (back and forth) so I guess that’s enough to make such harsh claims. The only corner that might be indeed worth is the northern part but please, don’t be silly like me and rent a motorbike. This is probably the part where beaches might be dotted with palms and hidden in lush rain forests. Unfortunately, I didn’t make it there. But it might be the only worth spot for beach holiday seekers.

As I said above, if you are a photographer, hobbyist or professional regardless, you should probably love it. PQ, as many other parts of Vietnam, does justice to this typical buzz you can find on markets, streets, and squares. People start roaming as early as 3 am and this provides a perfect opportunity for some unique blue-hour shots.

What is more, PQ offers a decent variety of quaint cafés (my go-to place for coffee and smoothies was Ca Phe Sua Da) and bars, traditional restaurants, markets – wet or dry – and simply wandering around was always inspiring. I spent my days there literally out on streets. Luckily, I spent there two nights only, as trust me, more would really be not advisable for a spoilt beach addict like me. Yet, during those a little less than 3 days I barely slept as I didn’t want to miss a single opportunity to shoot. Early morning, late at night, I was there. And my buddy Fuji xa3, God bless him, couldn’t believe the pace at which I was clicking. The inspiration was endless, and my hunger for memories in the form of photos was insatiable.

Compared to other wet markets I have been to in Vietnam, PQ was definitely the most hardcore. In a good way though. People were swarming in this typical style, with no system whatsoever, yet impeccably organised, among stalls with all kinds of goods. However, meat, my dear friends, meat was the real hardcore. Blood from dead animals was just everywhere you looked and the air smelled iron way too much. Walking required careful treading as stepping into a puddle of blood would be incredibly easy. Beauty and mess in its rawest form. Holy mishmash!

People were incredibly friendly and if we could understand each other somehow, which I will address in a paragraph below, it would be even ‘awesomer’. As a woman, though, I got a lot of attention from men and it felt great. When they saw me with my camera, some of them were literally thirsty to appear in a photo and would happily pose.

Whenever I’m in Vietnam I always have at least a few cups of egg coffee. My first encounter with this amazing beverage dates back to 2018 when I was in Hanoi. I fell in love immediately. In PQ you can sip it while watching sunset. I love Phu Quoc is the place where you need to be.

It’s supposed to be the best restaurant in the PQ. Well, it’s not. The food I ordered was cold, since they brought the starter, main course and dessert all at once. Holy mishmash. The communication in English was even worse than the food, but the view and coffee were to die for, so I forgave them.

I will allow myself one last remark. I’ve been to four different places in Vietnam, all of them more or less tourist spots or major cities. And I can’t help but wonder how come most Vietnamese still suck so incredibly at English. Leaving Hanoi aside, where things were easy, in Phu Quoc even in restaurants and hotels the communication in English was challenging to say the least. Employing body language or using phone with pictures didn’t work either.

I know that travelling is about accepting other cultures and as a teacher I should be more forgiving, after all it’s my bread, so no offence to anyone, but I guess I have become slightly critical after multiple exposures to irritating blank stares and answering yes to everything, even open-ended questions. Comparing with say Cambodia or Myanmar where even the simplest parts of the commercial chain such as boatmen, beach sellers, cleaners, guards, etc. could hold a simple conversation and give advice where necessary, Vietnam falls way behind. I know the circumstances under which they were exposed to languages were not always ideal, but this extremely prevalent foreign language ‘proofness’ is just nothing short of spectacular. And yet, penning this post in the time of partial lock-down, I would give anything to be there now. So nothing sinister indeed, just an observation.

Thanks if you read till here. A story about my Phu Quoc bicycle trip is coming up with a (hopefully) bonus feature.