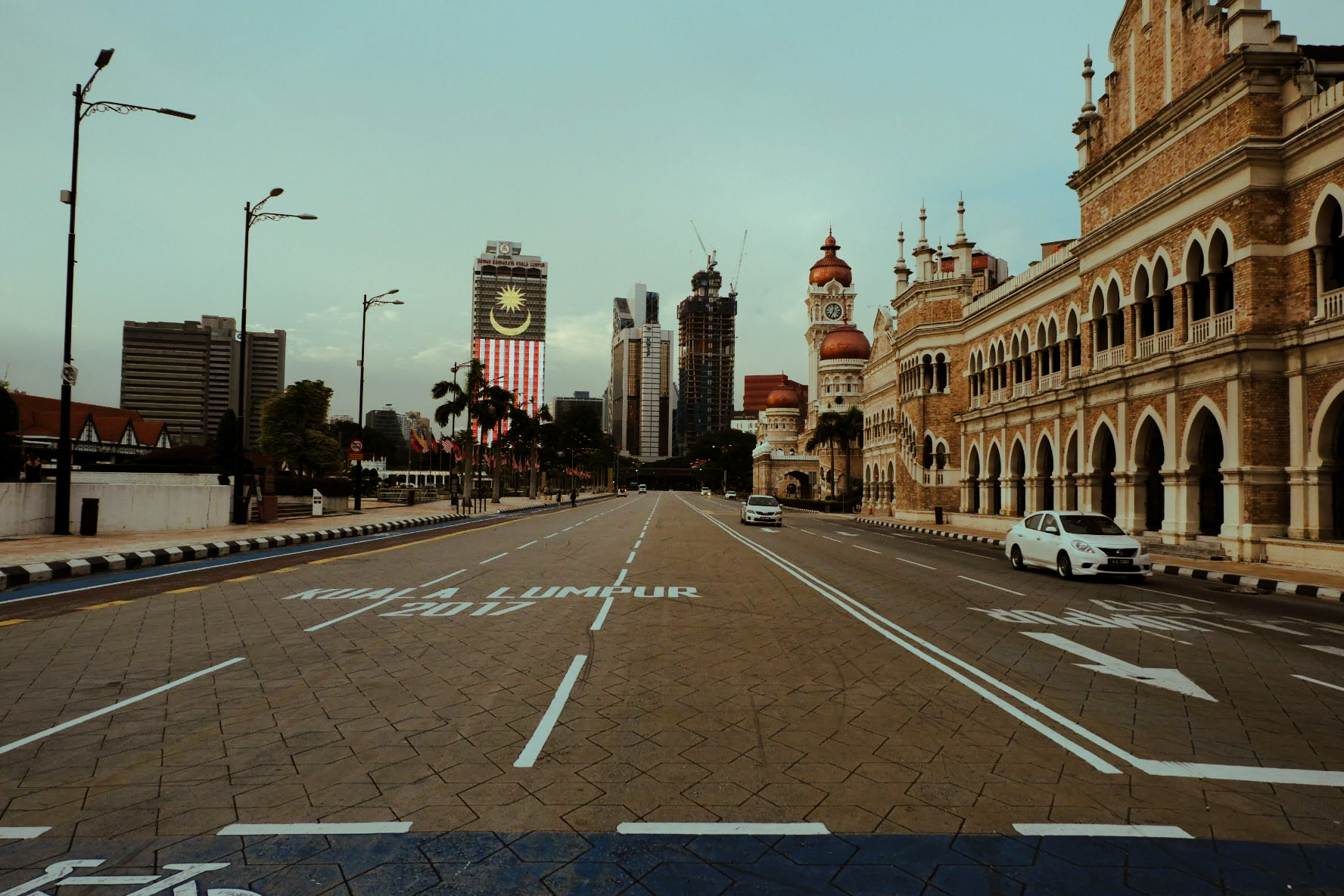 When covid-19 struck and Malaysia went into partial lockdown. I, as many other people around the world, got initially really depressed that all my trips abroad got cancelled. Petty, I know, as there were way more important issues and consequences to be dealt with at that time. Along with the depression and stress when dealing with refunds (where my efforts were pretty much futile but now I at least know how to use that money as I’ll describe below), I also got a pretty serious ankle sprain.

We all know, or perhaps at least believe to know why or how corona happened. But you still don’t know how my sprain happened, right? Lol. There were a number of reasons. First of all, I’m quite an active person and walk loads. If a place is reachable on foot, I’ll definitely walk, often with my buddy Fuji xa3, of course.

The lockdown meant that we were allowed to go out only for essentials.  In my case that was grocery shopping. And that means I got out once or twice a month. I could have done it more often, even every day honestly, but I seriously hate shopping. Grocery or any kind of shopping for that matter. Every year I hate it more and more. Despite the fact that it was the only legal way to get out, I still couldn’t force myself. Simply, grocery shopping is something I am expert at postponing and I’ve been honing that skill for a long time. There is one lovely exception to this rule though and that’s shopping with my mum. I really enjoy it with her as plenty of other activities. That’s the only downside to life here in KL, being far from my mum. We can’t have it all.

As you can imagine after almost 50 days of “being grounded”, I desperately missed walking and shooting. While I would always take my camera and secretly shoot in the neighbourhood on my way to or from a supermarket, it wouldn’t give me the same satisfaction. What’s more, I didn’t want to overdo it as police patrols were everywhere. And trust me, you don’t want trouble with local police, let alone immigration office.

Once we were finally allowed to go out legally, I took the city by storm. It was amazing, most people were still at home, probably biding their time, and I had the whole city to myself.  It was weird though. Scary at times and it looked totally post-apocalyptic. I couldn’t stop wandering and shooting, and pondering at the same time. ‘What the hell has happened?’, I remember thinking on several occasions during my super long stroll. Speaking of long, at around 10pm I realised I had been walking for almost 8 hours straight and it was time to go home. The new government protocol said no more activities after 11pm.

I guess my foot protested against the sudden burst of energy. Quite poetically a few hundred meters from my home, when not only me but also my mind wandered around and I wasn’t present at all, my foot decided to say ‘stop’! It happened in the evening, near a bus stop where two local guys were having a smoke. I was actually going to ask them if I could take a photo of them as the smoke and city lights were creating a nice combo. Instead, making a beeline towards them, I smashed myself on the ground in front of them like a bag of potatoes.

They were nice to help me get back on feet, one foot that is, but quickly disappeared as I was squealing in pain and breathing heavily. Maybe they thought it would be a hassle, should it be serious but I was grateful they lifted me up. They also saved my sun glasses which fell into a sewer. So I was happy. No complaints here. Though I thought they could have gone a tiny bit further and take the damsel in distress home, but I guess I suddenly became unattractive. I was moaning, moving back and forth, hissing in pain and there was nothing but urgency in my face. I can understand why that didn’t appeal to them. So, ironically enough, instead of a cool photo, I ended up creating myself foot as big as Malaysia.

The bad news was that apart from shopping I also don’t like going to the doctor, especially not for emergency situations. So even if I was in great pain and couldn’t walk at all, I completely pushed the idea of seeing a doctor away. I’ve had ankle sprains before but not like this. This was so big and painful… But I still tried to focus on natural healing. A couple of good friends helped me. One by providing crutches from his previous accident, another by providing mental support and offering buying groceries. God bless them.

My mum along with these good friends were asking me about the leg and if I’d seen a doctor. I kept telling them it would heal on its own. Despite the ugly fact that I was bedridden for almost a week, I still didn’t want to let this idea go. I researched ankle sprains and learned that some severe cases could take months to heal but that they would heal… eventually. I focused on the positive information though and often intentionally skipped any sentences or parts which recommended seeing a doctor.

However, when after 4 weeks I still wasn’t able to walk, even after trying some exercises and home remedies, it became crystal clear that it really wouldn’t heal on its own and it finally dawned on me that the ankle needed medical attention. I gave it another week though – just in case a miracle would happen – before I decided to consult a specialist. The minute I saw him I felt instantly better. You see, doctors are important. I am always against taking pills or harming our bodies with chemistry unless completely necessary, but in situations like this one seeking medical help immediately would have definitely helped. Never mind. We live and learn.

The doctor was great and obviously recommended physiotherapy and paradoxically that’s where my new wonderful travel adventures began. My physiotherapist was called Damia and I absolutely fell in love with our regular sessions. She is such a wonderful person that I will always remember. Every session we talked about different kinds of things, she talked about her country me about mine, about our work, about our personal lives, plans and all. I actually never met such a good female conversationalist among locals here in Malaysia. No offence, but that’s true. And I won’t elaborate more on that now as it would get me sidetracked.

After about 2 weeks of regular sessions, my ankle was improving and I could already make first more confident steps for the first time in about those long 6 weeks! Yay! One day when Damia mentioned her and her husband’s home towns it simply hit me. ‘Bloody hell, after almost 5 years in Malaysia I have no idea what she is talking about.’ I felt both ashamed and genuinely curious.  So I just asked her without much thought: “Okay, how do I go to these places? I don’t have a car but I feel a burning desire to explore all those places. Please tell me how.” The urge to explore this beautiful country was so tangible that I could barely stand it. I realised that apart from some major attractions I’d otherwise seen nothing of this wonderful land. And I was resolved to fix that.

Damia gave me plenty of ideas on places, transport and what to see. Every session, she would perhaps add something new to the growing itinerary in my notes. I remember this first conversation though happened on a Monday in July 2020 and on Thursday that week I was already on train to Seremban. And I’ve not stopped exploring since. Malaysia boleh!

My first trip wasn’t spectacular but definitely totally eye-opening. ‘How come it never crossed my mind?’, I couldn’t believe my own ignorance. But well, there were definitely good explanations for that. And I believe that everything happens for a reason and at the right time. For example, if I had travelled to all those beautiful placed earlier, I wouldn’t have been able to take cool photos as I only purchased my mirror-less in July 2019. And then there were other reasons, such as my working my ass off making extra cash only to spend it on expensive beer (it really is excruciatingly expensive here in KL) later on in order to cope with the stress from workload and weight of ambitions. Silly huh?

Since covid-19 has shown us how unpredictable life is and how quickly things can change I have decided to travel through the country as much as possible and beat it to death, as I have no idea whatsoever what the future holds. Nobody has. But I know one thing for sure. And that is that should I once leave the country, and God knows I am not ready for this yet and don’t know if I ever will, it would pain me deeply if I did so without having explored it to its core.

Thanks covid-19 for letting me understand that you don’t need to cross a border to explore (and blog). Thanks ankle sprain for taking me to Damia and thanks Damia for sharing amazing tips and making me totally insatiable for travel within this beautiful and amazing land.