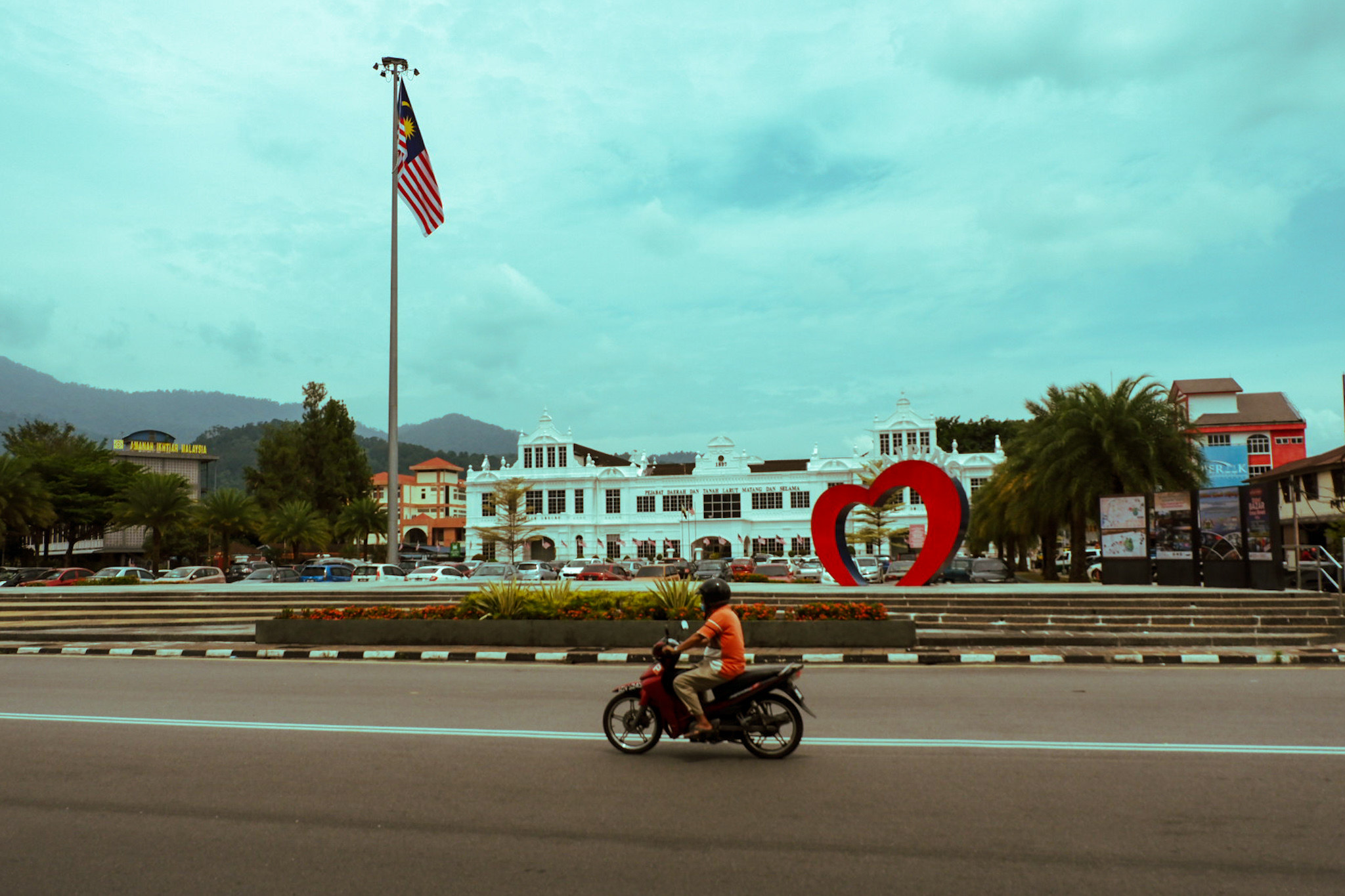 Some 266km from Kuala Lumpur, in the state of Perak, further up north from Ipoh, lies a small sleepy town called Taiping. It’s not exactly a tourist destination, but it’s certainly worth a visit, as goes with many other sleepy towns here in Malaysia. I ventured to this one as part of my recent sudden passion-for-local-travel outburst, which I described in this post. When you have spent years living in Kuala Lumpur and travelling mainly abroad, short local trips may be incredibly eye-opening as you realise how many great spots lie under your nose. To me this awakening felt as if I had just arrived and the adventure was starting all over again. Certainly not a bad feeling to experience…

Discovering the efficacy of the ETS train link was definitely one of the best things that could have happened post the covid-19 craziness. (though I am typing this during a second partial lockdown, so perhaps I am just lying to myself about the situation being over) It’s fast, spotlessly clean, comfortable and always on time – a quality one must hugely appreciate in this country. Basically, I spent my August weekends on this train and it was fantastic! Discovering some Malaysia gems has never been easier. What’s more, it often brings you right into the town centres or just a short walk away from them.

Yes, ETS is almost perfect, except for the cold. Malaysians still haven’t quite grasped the reality of being a tropical country and are incredibly obsessed with air-conditioning, desperately trying to simulate a harsher climate. Everyone claims that cinemas are the worst, but they haven’t been on an ETS train yet, because frankly, folks, this was the coldest I had ever, I mean EVER experienced here. Just wear those extra layers, especially for longer rides. Ticket to Taiping will cost you MYR113 return.

Bonus for readers in Malaysia

Of course being on such a nice train and not having a view can pretty much suck, especially if you are a newbie or a traveller who wants to enjoy the scenery. I have therefore collected the numbers of seats that don’t have a window. If you like a nice view and plan to get on ETS at some point in the near future, you may want to have the list. Just like my photo from Taiping on Instagram, comment on this post and add “list” at the end of your comment and I’ll send it to you via email.

Taiping offers all – budget, middle range and high-end options. I’ve never been a fan of high-end, especially here in Malaysia because you will often pay for services you will never get. Harsh, I know, but true. Perhaps it’s not like that everywhere in Malaysia, but I’ve seen it in way too many places and figured it’s a waste of money. Budget is not my cup of tea either, so the only option left is middling really. Still, if you are reading my blog, you have surely noticed that I’m anything but an average person.

I stayed in Louis hotel and it was an amazing choice! Spotlessly clean, efficient, quick in responding and they even offered an upgrade for the same price (MYR100 per night). What’s more, it’s right in the centre, close to everything travelling Sonia needs, no need to think twice here.

One of the most important things on my recent trips to towns and cities in Malaysia has become finding a cafe that serves great food, coffee and drinks so that I can chill there. Mostly these attributes can be found in cafes run by Chinese. Nothing sinister here, just an observation. After all, Taiping is rather a Chinese community. The cafe I went to all the time is called Triple Shot Bed & Coffee. A bit on the pricier side, given the location, but all yummy and refreshing.

Another coffee place – Monday Brew Cafe – or more precisely one of its drinks aroused my curiosity. It’s called Passion fruit cooler and the menu sold it with this slogan “It was Obama’s favourite drink for a reason.” ‘Oh really?!’ I jumped in my seat. ‘Obama drank this?’ Part of me kept wondering, staring at the menu and another part was already raising my left hand to quickly call the waitress and order this ‘super famous’ delight.

I don’t think I’ll be spilling the beans if I say the drink was nothing but incredibly sweet (diabetes anyone?), although to be frank I did feel refreshed after it, that is once the diluted ice made the potion more drinkable. When I later saw a Barack Obama street aka Jalan Berek – cute, huh? – and also other mentions of this famous president in various places as I wandered around, I started seriously racking my brain over it. I mean, ‘Obama was here??? In Taiping? Really? Why?’ I was continuously asking myself, shaking my head in sign of both admiration and disbelief.

Upon returning to my hotel room I immediately did a lot of research. Aaaaaand this is what I found – nothing!!! Try as I might I couldn’t find any information on President Obama’s link to this town. However, I did find a mention confirming that during one of his visits to Malaysia (there were two altogether), Obama visited an area in Perak, close to Taiping. This would make sense. Another, perhaps slightly less exciting explanation could be that locals are fond of him. Too bad I couldn’t dig any sensational piece of information here. Anyways, cheers Obama!

One of those mock cocktails will come in handy especially if you have just walked through the immense Taiping park. It’s a large green space where locals hang out, run or do other forms of exercise and you definitely shouldn’t miss it. Even sitting on one of the benches dotting the area will do. There are huge trees offering shade, small lakes, swans, running and walking trails, bicycles for rent (though with a funky rental system) – really quite impressive.

I bet golden hour must be great for photography there but unfortunately it was cloudy when I went. No wonders, Taiping is known for being the wettest town in Peninsular Malaysia. That’s also why the trees which surround the gardens are called rain trees. Not only do they impress visitors, but they also form an important part of conservation efforts against further development in the town in this specific area. Fingers crossed those giants will always proudly spread their branches across this wonderful part of the town.

Just a short walk away from the park is the Flemington Hotel with a nice roof top bar. Don’t expect the KL style of course, but rather a nice, chilling and inviting atmosphere with cheap beer and tasty bites. It’s true that when one of the reviews of this place I read described the view from top as ‘mesmerising’, I laughed at it when I saw it. It’s totally not mesmerising, but it’s still an interesting spot.

Old is the new black

One of the reasons why I also liked Taiping was its unbelievably charming ‘old schoolness’. Old flaking cars, old flaking buildings, old bicycles, old everything and everywhere you look. It was great to see such an incredible revolt against the pompous shiny modernity so typical of large metropolises.

What, however, totally made my jaw drop was Taiping’s bus station, eloquently called Taiping Bus Terminal. I mean Holy Mishmash! I honestly didn’t see that coming. After having walked across and upside down the town for some long hours I already developed a solid feel of it but reaching the bus station totally tore it to pieces.

Taiping Bus Terminal is something else. It was definitely built long – I mean really long -decades ago, I don’t even dare guess how long ago, and it quite obviously hasn’t been updated nor reconstructed nor refurbished or anything of that sort since then, not in the slightest. I just stood there at first, staring at the unusual scenery. A complete raw experience full of prehistoric red buses that gave this impression that every gear change may cause them to fall apart.

I loved it to the bone. Coming from ultra-modern Kuala Lumpur, this was the best ‘from old times’ shock I could have wished for. What’s more, knowing that I was going to ride one of those buses the next day injected an incredible portion of inexplicable childish happiness into my veins. Indeed, I felt like a kid who was about to experience something ‘big’. Simplicity is powerful and it has had me under an incredible spell recently.

The quirky journey to old times didn’t stop there though. After a long soaking up the atmosphere of this gem, I proceeded to enquire about the bus schedule and other details.  First I approached a man sitting in a small window. When he understood my intention he immediately directed me to the next window. ‘Hm,’ I thought ‘they are organised here. Every window has its own role’. The man next door, elegantly enjoying a smoke in his primitive small booth, sat on a stool in front of even more primitive board.

“Hai. Pukul berapa bas besok pagi ke Kuala Sepetang?” I boldly asked about the departure times. The minute I finished the sentence, the man sprung up so enthusiastically from his stool, vigorously gesticulating and pointing at the board. He explained everything in simple Malay with additional words in English when I seemed confused. ‘Fantastic! This terminal is just awesome,’ I kept raving. “Terima kasih banyak banyak,” I thanked the man and proceeded to the platform just to verify everything with the drivers who seemed to be enjoying their break.

The fact that the man in the ticket office, who however sold no tickets,  as well as the drivers I approached were so incredibly sweet and ecstatic about my presence including  my attempts at speaking Malay only added to my excitement. All of them eagerly explained to me the whats, hows and ifs and I left the bus station absolutely thrilled, frequently turning my head just to prolong the delight of seeing something so unique as this ‘bus terminal.’ ‘I can’t wait to get on the bus tomorrow,’ resonated in my head as I formed images of what it was going to be like.

32 thoughts on “Taiping – Old Is the New Black”